Sunday August 12th – Today we are off to Dent Island Lodge. Once again, we have to time rapids to get to our destination. Dent Island Lodge is surrounded by rapids. The only way in or out is two times per day when the water runs slack. We made it through no problem then tied up to the dock.

The Lodge is owned by the Nordstrom family. Its located on a tiny little island with a very narrow extremely fast running rapid right next to the lodge that only small boats go through when the water is calm. The lodge had just been completely rebuilt so we were excited to see what they had constructed. We had lunch at the beautiful new lodge then dinner with all 11 of us.

Monday August 13th – 6:30 am, Zach Skylar and I sluggishly meet our fishing guide and hop in his small boat for a 4-hour salmon charter. Todd, Bruce and Brian do the same with their guide and we all take off to each guide’s hot spot. Except not so hot today. We had 2 fish on, but they got away, then we landed a small fish. Back at the dock, the other boat was not even that lucky, no fish for them, but we all had a great time.

The small rapids next to the lodge were in full swing. Skylar, with a crazed look in his eyes, asks Julie if he could take the kayak and go run the rapids. She deflects, saying I want no part of this, go ask your dad. I explain that I didn’t think it was a good idea, but he would not let up. I knew where this was going so against my better judgment I agreed. With his life jacket on, we talked about what to do and where to swim if he fell out.

He takes the kayak and paddles it up the back eddy then turns it into the rapids and runs down the rushing water while everyone watches except Julie who was hiding on the boat. First run, no problem, but things went south quickly. On the second run, now a little too confident, he makes the turn, but the water catches the side of the kayak and flips him over. He bails out but holds on to the paddle while the half-sunk kayak continues on without him. 45-degree water is extremely cold, but he didn’t seem to panic. He did exactly like we talked about and swam to shore where the water was running slower. Using all his available resources he paddles himself with the kayak paddle to make faster time. He makes it to the opposite shore from the docks, which is a little island not accessible from the lodge except by boat. People on the dock went into rescue mode. Someone had a dinghy in the water and they were able to get over there to pick him up. He made it back, very cold, and with a look of fear in his eyes. Lesson learned! 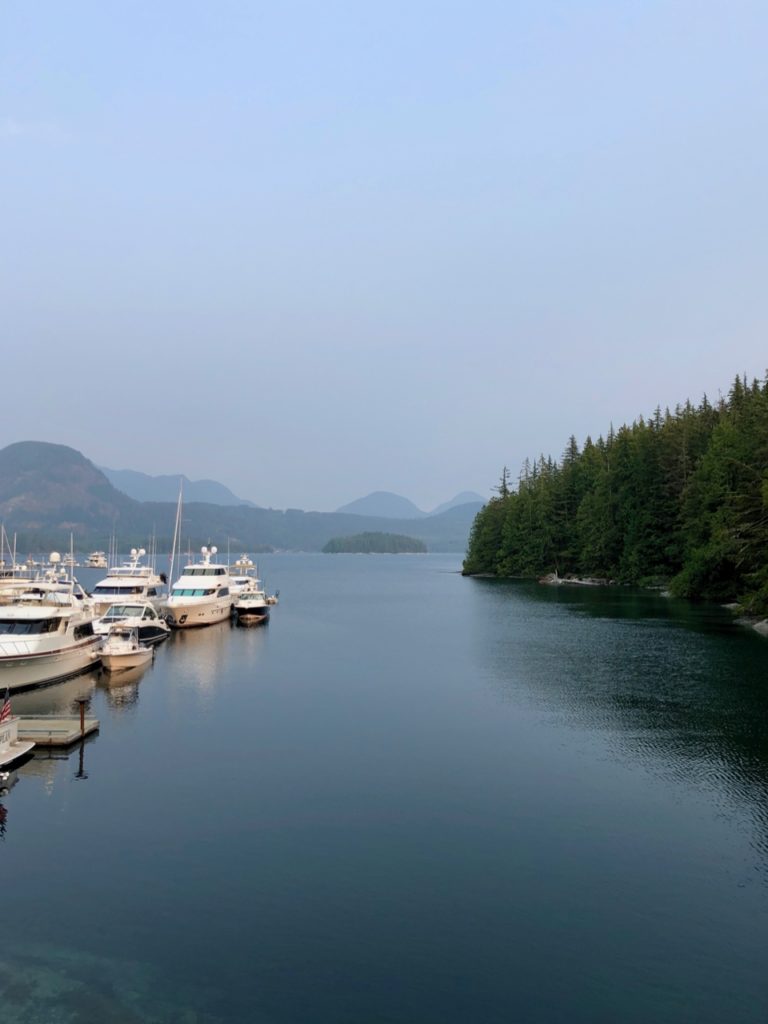 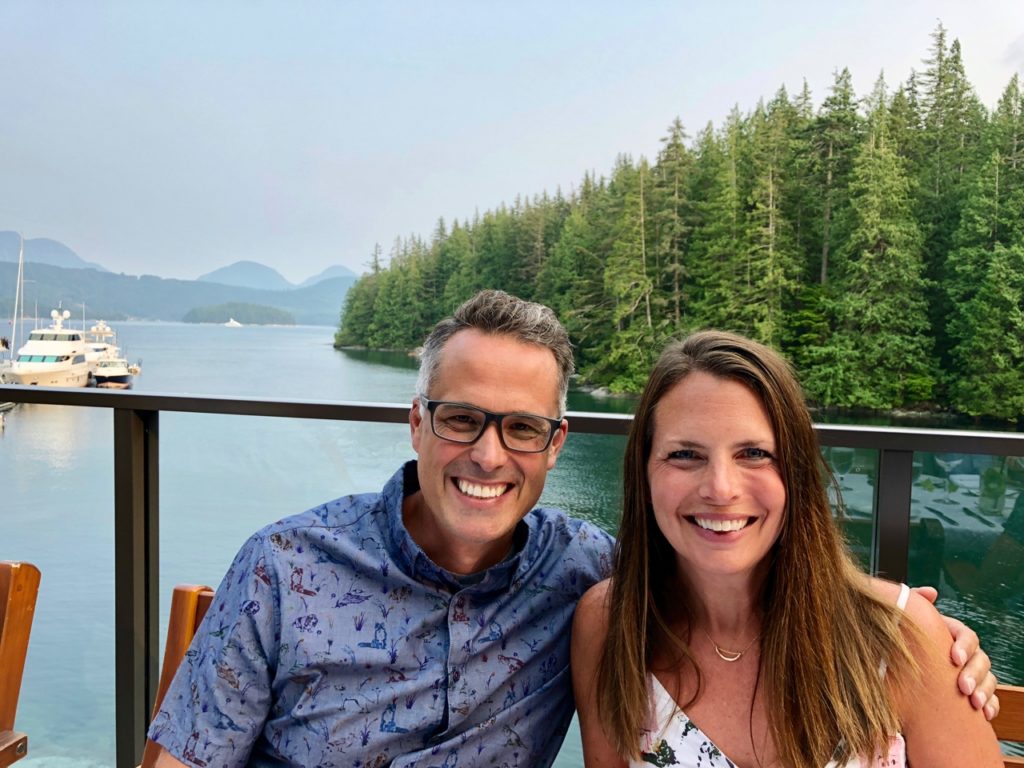 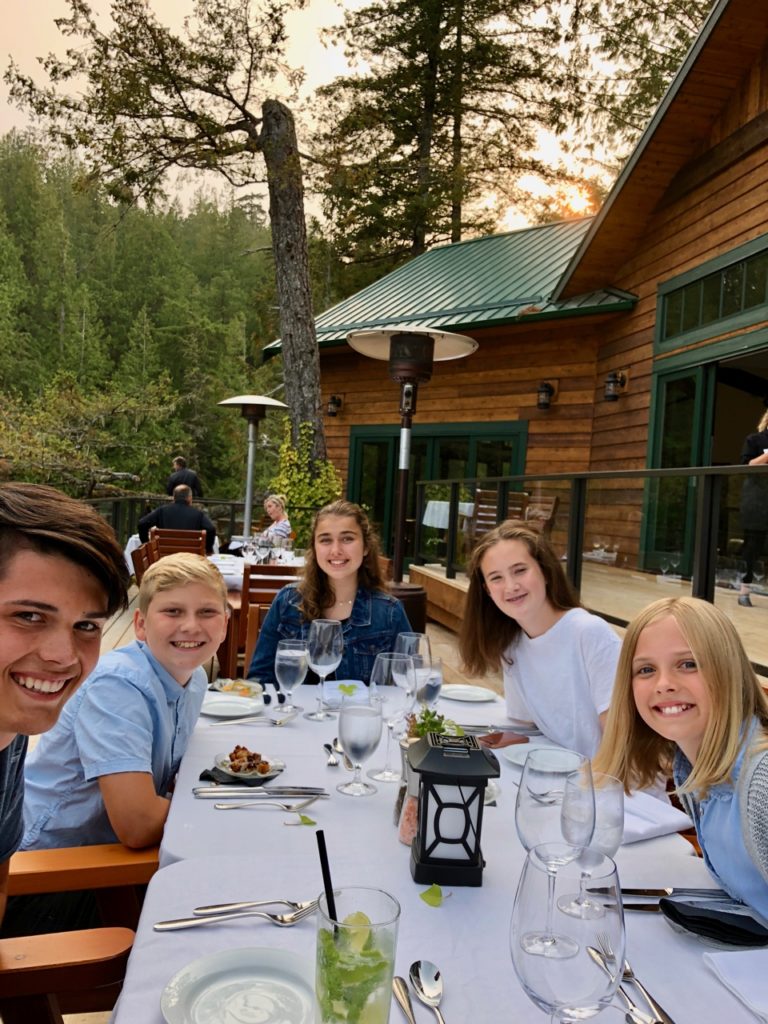 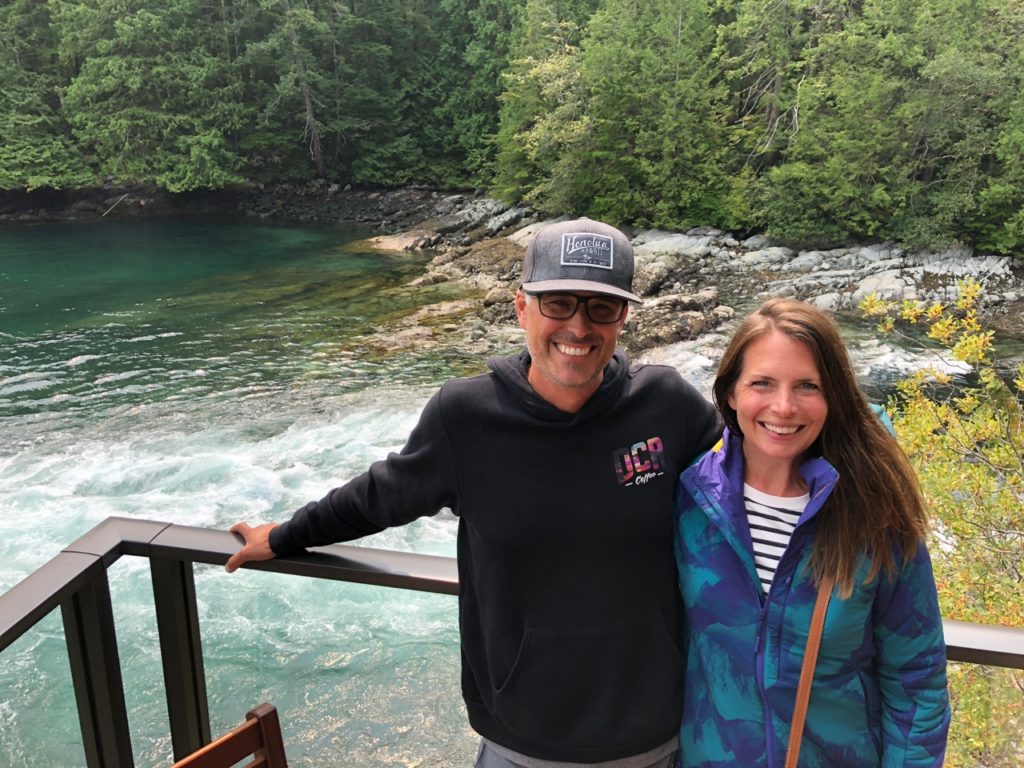 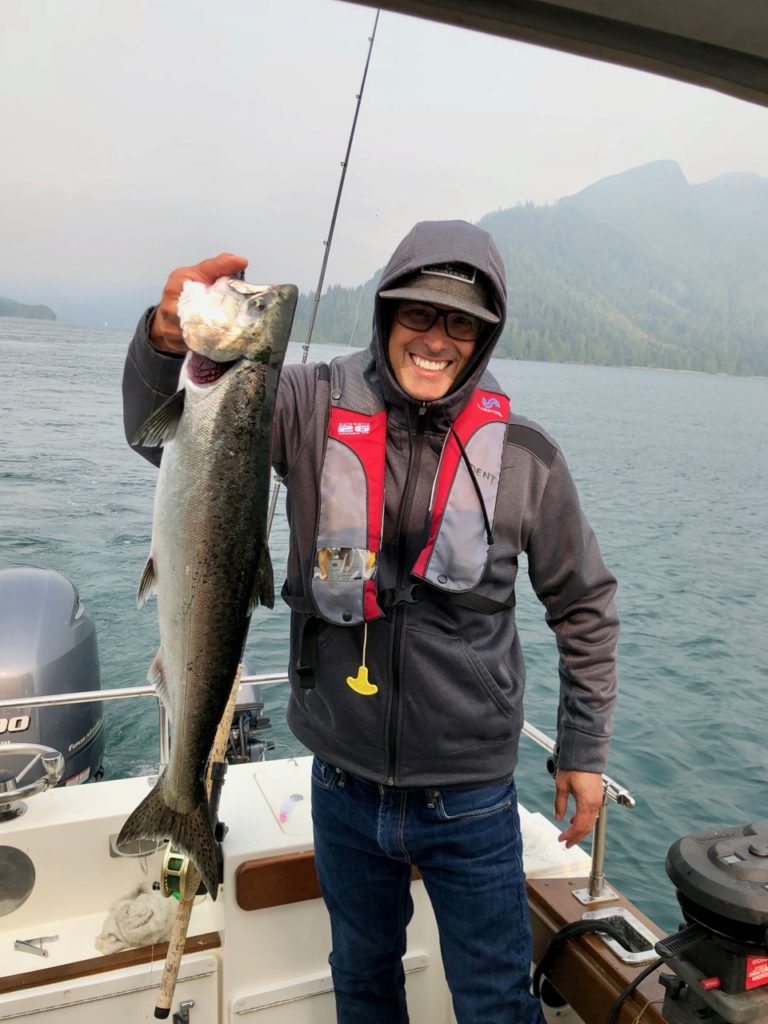 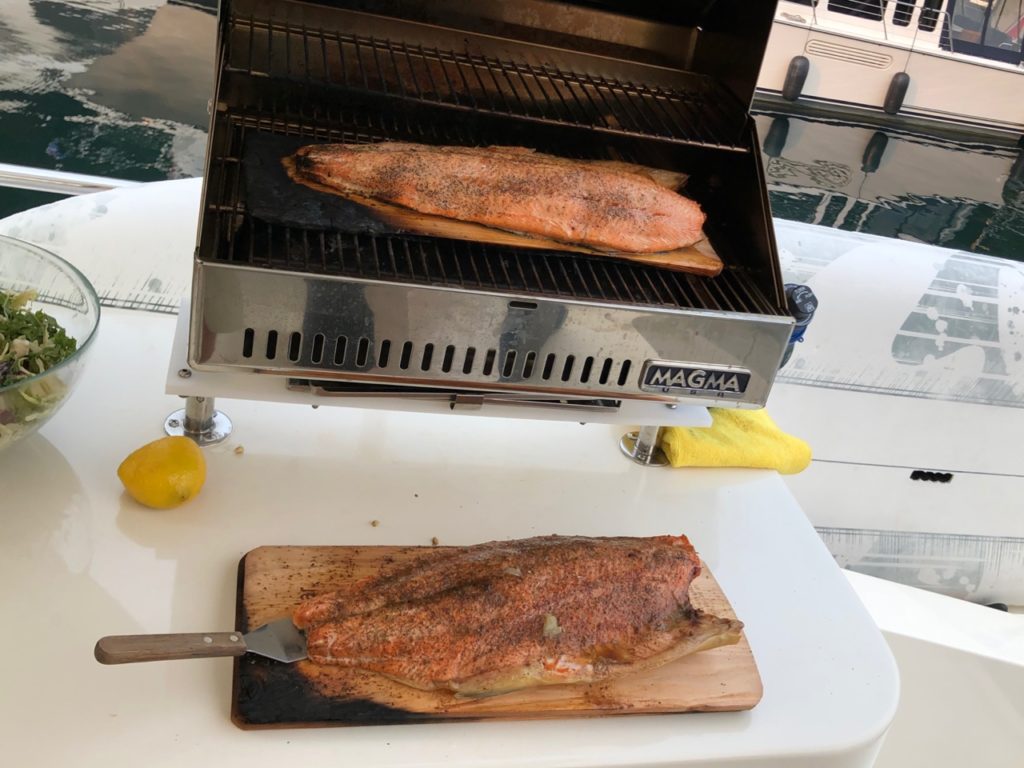 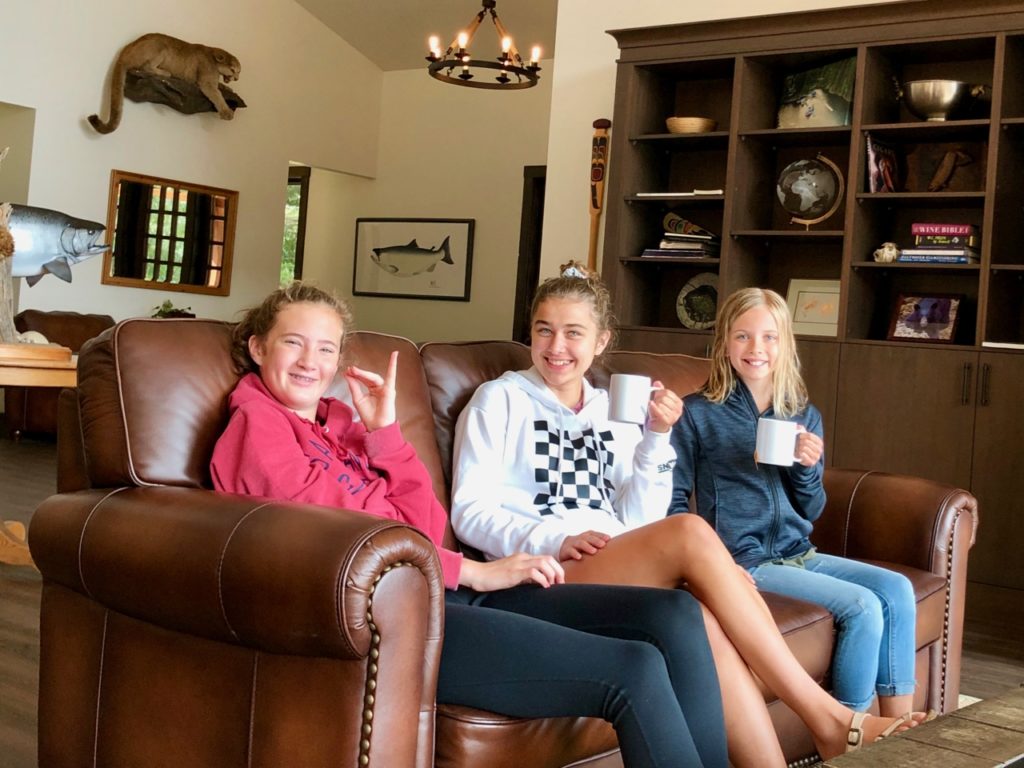 Tea time for the girls 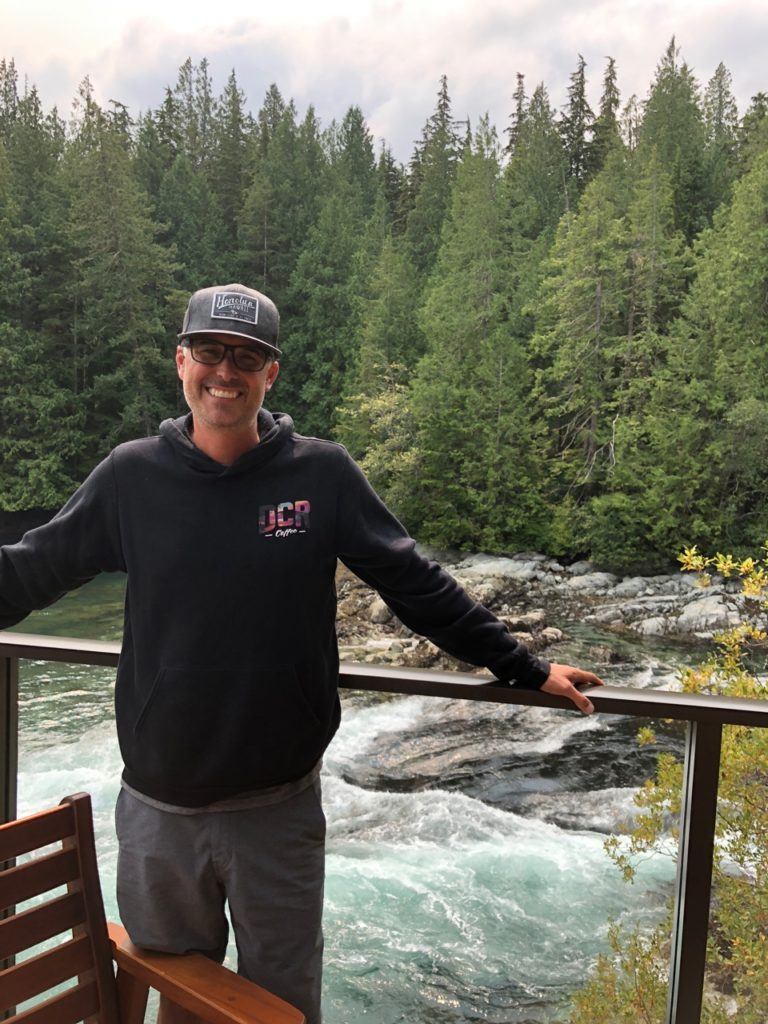 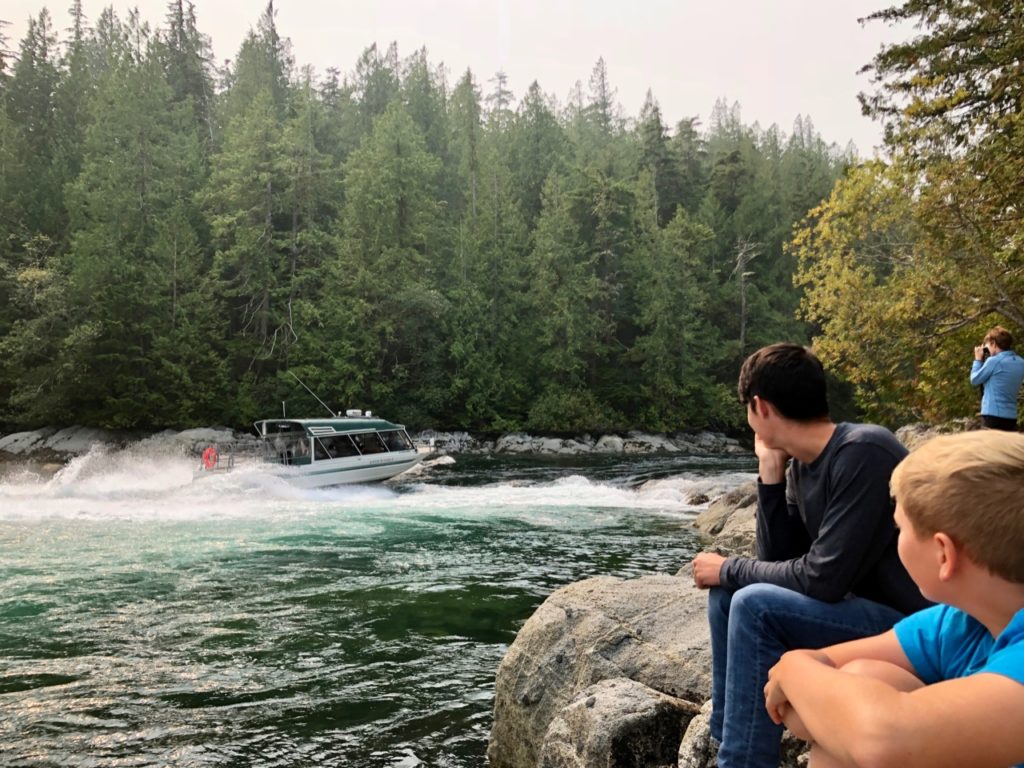 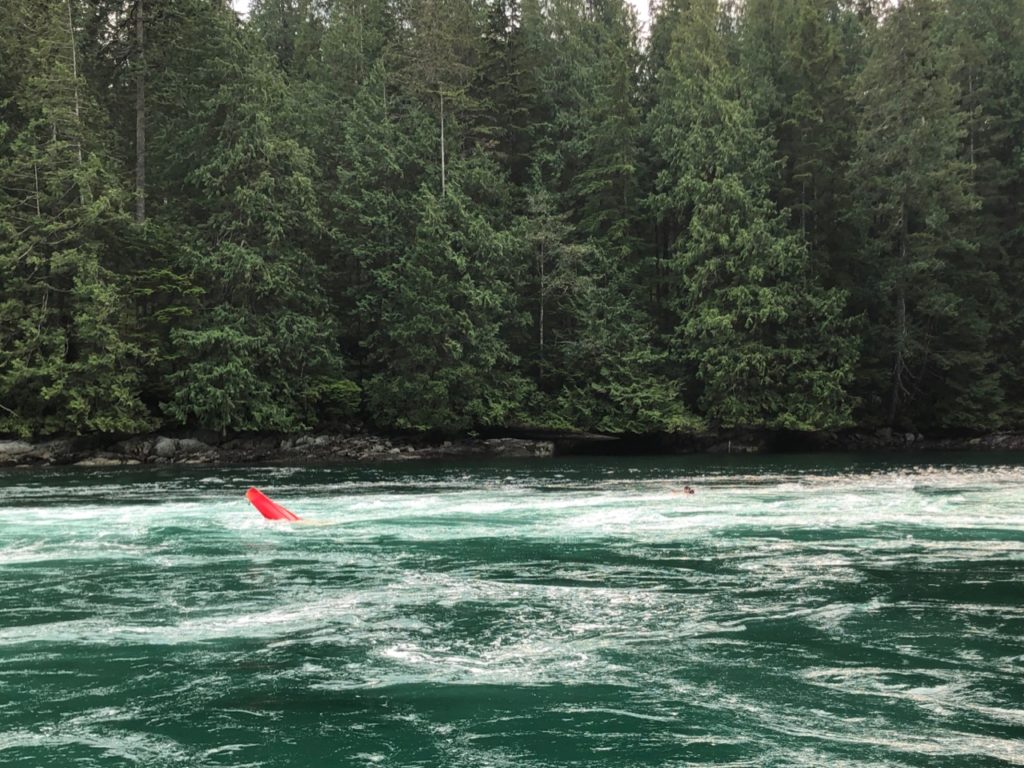